I’m writing this post while waiting at Baltimore’s airport (BWI). But I probably won’t have the opportunity to post this until I’ve left BWI because I couldn’t connect to their wireless access (finally able to post it from home). Travel can be great, and travel can be terrible. What’s so great/terrible about it? 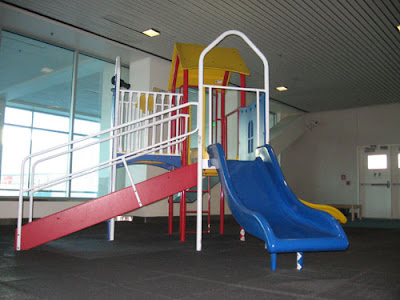 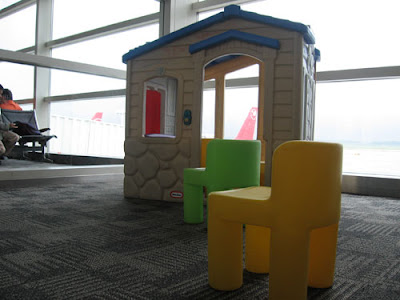 I wish I had a photo from the play area in Salt Lake City. My kids spent an hour picking up Duplo building blocks, filling them with Lincoln Logs, and organizing them in a little Fisher Price playhouse. I don’t know what the organizational process was, but it kept them busy for an hour. And when you’re trying to entertain two kids over a 3 hour layover, this is a great thing. The Portland play structure (first above) obviously has a lot of physical activity to it, and it’s always a good thing to try and get as much energy out of the kids before they’re on a plane for three and a half hours. Even the Detroit one (second above) kept the kids busy for half an hour until we were ready to board the plane… moving chairs in and out of the house, pretending the house was a take-out restaurant…

Now these are of varying degrees of cost and integration, but all of them kept the kids entertained. Which makes the parents more relaxed travellers. Which creates a better travel experience. Why wouldn’t every airport spend the $200 or $500 or $5000 to put one of these things in place to make people look forward to traveling, instead of dreading it? Why not make people want to come to the airport, even if they’re not traveling? It increases business at the retail establishments, improves brand experience (for when these people are actually traveling), and starts to create a new category airports: traveltainment (okay, that’s just terrible, but I’ll trademark it just in case). 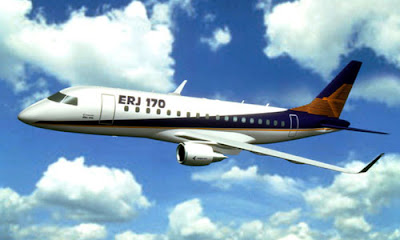 Returning from Columbus, Ohio a couple weeks ago, we flew to SLC on an Embraer 170 jet, which seats about 70 people. At first I was dreading the trip… 2 kids, three and a half hour flight, small plane. The seats were 2 per side of the aisle, and we have one DVD player (my laptop). But my experience quickly shifted once we took off. The flight staff made us feel special, exclusive, and well taken care of. Since the plane was so small, and it wasn’t full, it made us feel like the plane, and the flight attendants, were there just for us. The kids sat in 2 seats on one side of the plane and watched Wallace and Gromit. My wife and I sat on the other side and read. We never get to do this on a big plane, because we’re usually sitting with three people on one side of the aisle and one on the other. They had milk on the plane for our 2 year old (a huge deal since they banned liquids from flights). We arrived in SLC happy, instead of agitated and exhausted.

So how can the airlines take advantage of the idea of smaller, not bigger, planes? With a smaller plane, the flight attendants have fewer passengers to interact with, allowing them to interact with the passengers more. Which can create a better travel experience. Embraer even has a web site on exactly this (though it could use some help…). Bigger planes mean more people, which makes it feel more like a bus, and the flight attendants have more people to deal with, making their interactions shorter and less personal. Maybe more profitable for the airlines from a monetary standpoint, but less profitable from a brand relationship standpoint.

—
Frequent Flyer Programs
With all the travel back and forth to Hawaii, I’ve accrued a decent amount of miles. Enough to qualify for Northwest’s “Elite” status. While I saw the miles start to add up, I thought, “yeah, I’ll get to hang out in the President’s Club, get upgraded to first class, it’s going to be sweet.” Turns out Elite status means they waive the initiation fee for the President’s Club (like $50) but you still have to pay for a President’s Club membership (like $300/year). It also turns out you can’t get the free upgrade to first class when flying to Hawaii, pretty much the only place I travel for business. So all the benefits of these miles, of Elite status, have done almost nothing for me except left me disillusioned about frequent flyer programs, and how much (or little) Northwest cares about it’s frequent travelers. And I only have Elite status until February 2007, less than 6 months after I qualified for the program. The one bonus is I get 50% more “bonus” miles per trip, so I can use my miles to upgrade to first class. Woo.

—
Let’s eat/not eat
On Delta, they still gave us snacks and food. In fact, they gave us extra for the kids. On Northwest, it costs $1 for a snack mix, and $5 for some kind of boxed sandwich. Why are airlines trying to make the already stressful travel experience even worse, when they could look at current travel conditions as a way to create a significant travel advantage for their brand?

—
Conclusion
Play structures are great for kids and parents, small jets can be great brand experiences, and there are plenty of travel opportunities that could be made into advantages for those willing to challenge how travel within the United States is done. And BWI is now one of my least desirable airports to fly through.