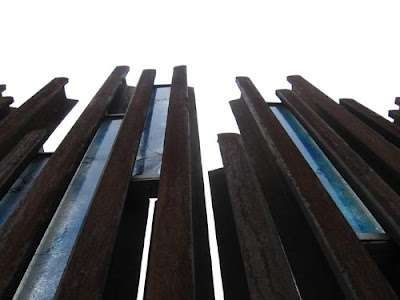 This weekend’s family field trip took us first to REI for some quality outdoor gear, then to Tanner Springs Park on the way home. A bit of information about the park…

“A series of community workshops were held between January and June 2003, allowing citizens to participate in the design process… the public was asked to submit suggestions for a permanent name for the park. After committee review, the name Tanner Springs was adopted in April 2005. The springs connect the park to Tanner Creek that at one time flowed openly through this area; today it flows through large pipes beneath the city streets. Since the design of the park attempts to recapture the area’s past with its native wetlands and flowing runnels, the name is fitting.”

For those not familiar with Portland’s Pearl District, Tanner Springs Park is the “other park” in the area. The “main” park is Jamison Square, where families from all parts of Portland gather when the weather is sunny and hot (yes, it gets sunny and hot here), so much so that I’ve heard the Pearl natives get a little restless about all the visitors.

On a cool, cloudy Saturday, Tanner Springs Park was all to us and a graduate student visiting from California. She was looking at the park as an example of sustainable, urban open spaces… she said that the park was designed in a way to take all the runoff from the area around the park, filter it naturally, and reproduce the wetlands that used to exist in the area. 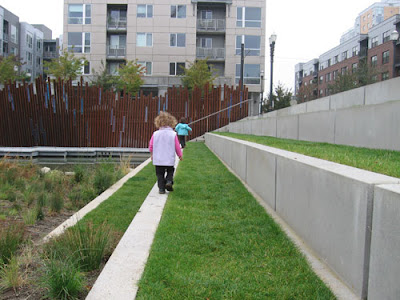 We’d always heard the park was very un-child-friendly, but our kids loved it. From traversing the terraced sides to running on the docks to checking out the rocks and water up close, they thought it was pretty cool. A little oasis in the middle of a rapidly developing urban neighborhood. What I really love about it there was a forward thinking group of people anticipating what the area would need 5 – 10 years ahead, and planned accordingly. When they started planning, there was nothing around. 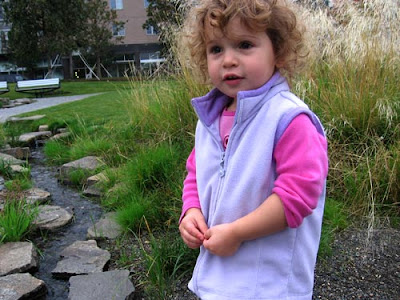 The park doesn’t claim to be the untamed wilderness. It simply claims to be an escape.