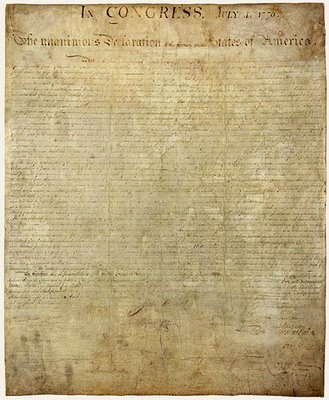 I’ve been reading a lot of manifestos. Manifestos about change, about creativity, about ways to approach ideas. But a couple days ago a close friend recommended I read the Declaration of Independence. I don’t think I had actually ever read the entire document, which I found to be quite inspiring.

Imagine the time when it was written… the British occupied the colonies, they were planning on eliminating any local militias and their weapons, there was taxation without representation (hey, I learned something from Schoolhouse Rock). The idea of the colonists organizing against the British Empire to free themselves from sovereign rule sounds incredibly brave, passionate, and a bit ludicrous. And maybe that’s the point. They truly believed in what they were doing, had the daring sense of adventure to do it, and knew that if they didn’t try, they wouldn’t succeed.

Today, these are the same attributes that change the way things are done.

There’s a lot in the Declaration of Independence that basically lists out what the colonists aren’t happy about. And there’s the part in the intro that says, “We hold these truths to be self-evident…” But there are some other key phrases and sentences that really stood out to me…

“That whenever any Form of Government becomes destructive of these ends, it is the Right of the People to alter or abolish it, and to institute new Government, laying its foundation on such principles and organizing its powers in such form, as to them shall seem most likely to effect their Safety and Happiness.”

What this means to me: if you’re not happy with something, change it. This is your right. And base this right on your principles, the ones that provide you safety and happiness.

“…that mankind are more disposed to suffer, while evils are sufferable than to right themselves by abolishing the forms to which they are accustomed.”

What this means to me: people would more likely suffer, as suffering is easier than change.

“…we mutually pledge to each other our Lives, our Fortunes and our sacred Honor.”

What this means to me: we must stand behind these decisions, for these decisions are the basis of our lives, our fortunes, and our integrity. If we can’t live with our decisions, with the passion, beliefs and conviction that what we are doing is right, then you can read the statement above about suffering over and over again.

—
Read the full text for the Declaration of Independence.